When he was only ten years old, Kento Masuda was already a noted prodigy in piano music and composition. Today, he plays his award-winning compositions on the world’s most expensive piano, Kawai’s all-crystal Grand Piano, which is priced at an astounding one million dollars. Kawai’s legacy dates back to 1927 when it was founded by Koichi Kawai and seven colleagues in Hamamatsu, Japan.

The company founded the Kawai Musical Instrument Research Laboratory and began to develop the world’s finest pianos, including the Kawai Grand Piano. Koichi’s dream was to build authentic Japanese pianos of the highest caliber and as the years increased so did demand, ramping production up significantly to the great pleasure of Koichi who had achieved his goal.

In 1953, Koichi became the first person in the musical instrument industry to receive Japan’s highest honors, the Blue Ribbon Medal from the Emperor of Japan. The Blue Ribbon Medal is awarded to those who achieve great success in public service. Koichi Kawai was succeeded by his son Shigeru, who steered the company into modern manufacturing. Like his father, Shigeru Kawai was a visionary and he knew that the key to piano purchases was to bolster music education. In 1956, Shigeru singlehandedly revitalized the music industry in Japan by establishing the Kawai Music Schools and Kawai Academy of Music to teach students and train teachers throughout the land.

The Kawai brand continued to grow and achieve great success, and only a year after celebrating its 50th anniversary in 1978, Kawai made history and produced more than a million pianos. The influence of the brand, which is well received world-wide, resulted in the development of Kawai branches in America, Canada, Europe, Australia, and Asia.

The peerless craftsmanship, combined with the most advanced technology, allowed Kawai to create the world’s most sophisticated and exquisite pianos. The company delivered excellence in upright pianos, digital pianos, electronic organs, and other musical instruments. Shigeru carried on his father’s commitment and legacy, receiving the Blue Ribbon Medal in 1985 from Japan’s Emperor. Shiregu’s son, Hirotaka Kawai, succeeded as president of the company and he pledged to carry on the traditional “commitment to excellence” which the brand had become known for. He oversaw the beginning of Kawai piano production outside Japan with the launch of Kawai America Manufacturing and beyond.

Ahead of its 100th anniversary, Kawai unveiled its flagship product, the million-dollar CR-1M, also known as the Crystal Grand Piano. Limited to 5 pieces and custom made in Japan, the Crystal Grand Piano is truly one of a kind. The large panels of cut crystal, mirror-like polished silver, and the finest wood showcase the instrument’s inner workings and components. The CR-1M model is the highly regarded Shigeru Kawai Grand Piano; however, the transparent materials produce a much richer and clearer resonant tone. It garnered worldwide press when it was revealed at the Milan Design Week in 2018. 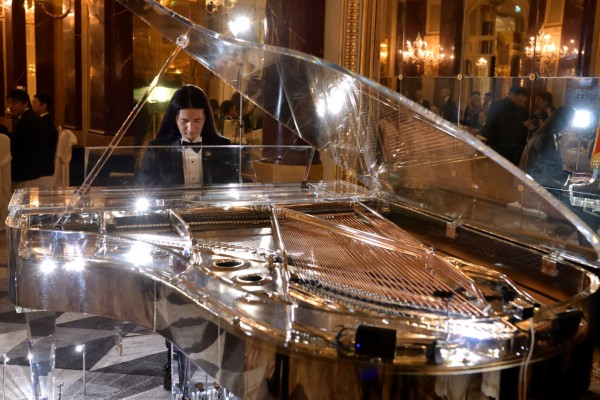 Throughout the years, Kawai pianos have held universal recognition from top professional pianists, including Kento Masuda. Masuda’s impressive legacy and extraordinary piano skills embody the vision of Kawai’s ideal piano player. Hailed as, “the eminent classical pianist of our generation,” Masuda has served as the Maestro to the Vatican, and as the composer of royal processional and recessional marches. Don Kento Masuda has recorded ten albums and received a multitude of international awards. Known formally as His Excellency Count Maestro Don Kento Masuda, his allegiances to the Vatican under the order of Malta and to the Kawai brand which has created and sponsored a see-through crystal grand piano worth over one million dollars for his sole use, are only two of many accolades and responsibilities he is charged with.

When Kawai first approached Masuda, he was thrilled to represent the brand and the fine instrument. “I travel with it and give concerts on it to esteemed guests throughout the world,” says Masuda. Reflecting the true artistic excellence that Kawai represents, Masuda certainly is the best pairing for the brand.